This model is the Atlas O SSW 40 foot Hi-Cube – which I note is entirely incorrect before you send me a flood of email – purporting to be the B-70-36 class cars built during the mid 1960s. I’ve begun writing again on the history and modelling of this class of SSW & SP cars and that will be available on Andrew’s Trains in the near future. The picture below is what the class should look like:

Considering that I got the model (and a sister car) cheap from overseas in a mixed lot of Atlas and other O scale models, it seemed like a good idea to use this car to do some weathering experiments. This unit uses several different mediums to complete the weathering. These include: 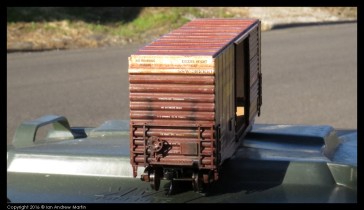 In late afternoon light an end view of the car

A late afternoon shot of the roof – rusting in progress 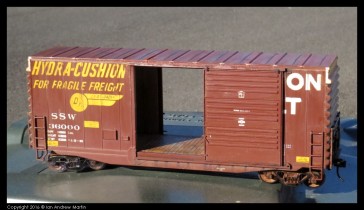 Side on view of the car, doors open

The floor of the car (originally black) painted with cheap acrylic, and weathered

Another view of the weathering in progress on the roof 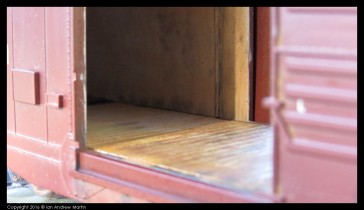 Another shot of the interior of the car

One more shot of the car, showing the floor and roof weathering

Early afternoon shot of the weathering on the roof 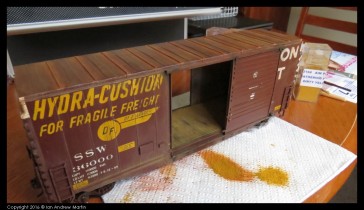 After the 2nd application of weathering powder

Additional powder added to the floor

Close up of the floor

A better look into the car

3/4 view along the body and into the car

Flash on and higher contrast in the image

Flash off and a similar view point

Flash off and looking in the door 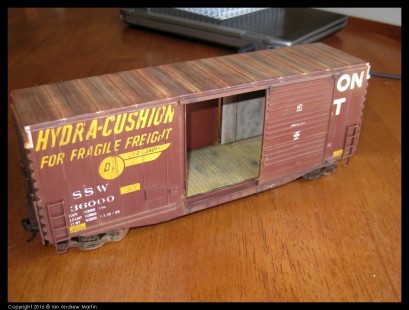 Flash on showing most of the car completed

Close up of the wall and floor weathering 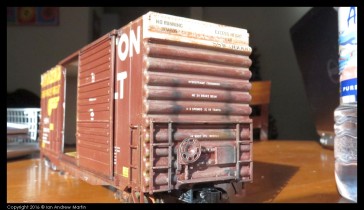 Low view along the roof

Work in progress (Aim weathering powders in use)

Finishing the application of the light rust and dirty yellow powders

Comparison between weahtered and unweathered roofs

Comparison of the side and inside of the cars

The only thing left to cover now is the work to get the trucks weathered and back in under the car. Then I’ll call the car finished.